Martin W. Robinson, Rail Veteran, Dies
Funeral services for Martin W. Robinson, 65, of 1029 Greenleaf avenue, Wilmette, who passed away Friday, February 18, were held Tuesday, February 22 (his birthday) at his birthplace, Clyman, Wisonsin. Interment was at Clyman. Mr. Robinson would have completed 40 years of service with the Chiago and North Western railway on March 1. He was a train collector and well known to hundreds of north shore commuters. Taken seriously ill several weeks ago, Mr. Robinson was removed to a hospital in Rochester, Minn., where he died last Friday. Mr. Robinson was born in Clyman, and with his family, came to reside in Kenilworth in 1895. He was the last member of a large family. In recent years he had resided with his brother-in-law, Patrick O'Mara, and his niece, Mrs. John J. Schneider, at 1029 Greenleaf avenue, Wilmette. Also surviving Mr. Robinson are three nephews, John, Thomas and Francis Chandler. 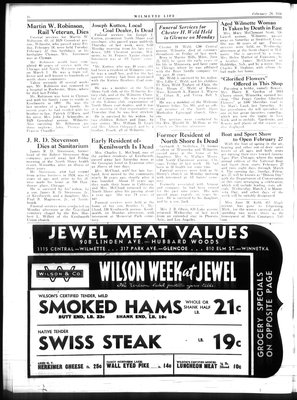